It seems to be a great debate that comes up around this time every year – is it okay to start decorating for Christmas before Thanksgiving?

It honestly baffles me that in September while shopping for Halloween decorations that the Christmas lights where already on the shelves.

I can almost understand retail putting everything out early, the Christmas season is one of the largest consumer seasons, but I have to draw the line when Christmas trees start appearing in main windows and lights find their places on roof tops.

Have we really forgotten all about Thanksgiving? The holiday that CBS’ Mary-Jayne McKay calls “our most American holiday.”

Sure, on the outside Thanksgiving just looks like a lot of food and some football, but deep down we all know that it is more than that. Or have we really forgotten our grade school lessons about the Pilgrims and giving thanks? 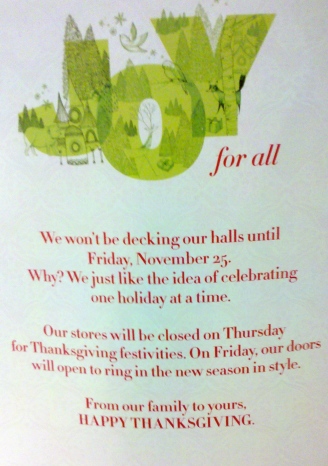 Wanting the warm, fuzzy, sharing feeling of Christmas; the year round giving – I understand it. But the decorations? Really? Can we not slow down a bit and be thankful for the things we already have before getting ready for new things? Can we slow down and be thankful for our families and the story behind Christmas that gives us this great holiday?

Before we put the tree up in the main window, Santa out front and spray some faux snow on the windows, let’s remember to be thankful for the things we have, maybe even hang a turkey up and rock the Pilgrim hat – oh and of course, enjoy being fat in the process.

Oh and a huge shout out to Nordstrom for having the above advertising in stores for the last few years.

Think Christmas decorations should be kept in boxes till the day after Thanksgiving? There is a Facebook group for that.

Please also feel free to express you views in a comment below.